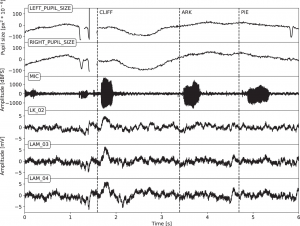 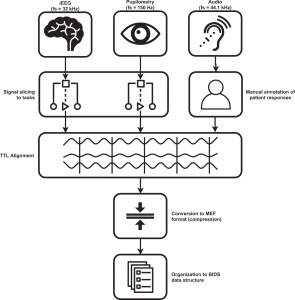 This month our BME lab published unique recordings of brain wave activities from electrodes implanted in epilepsy patients. The electrodes were recording signals from multiple contacts located in various regions of the brain as the patients were performing computer tasks for memory and cognitive functions. At the same time, an infra-red light camera was registering the size and position of the pupils in both eyes to determine gaze focus and the level of attention (synchronized with the brain activities). The eye is said to be the window to the soul… and, hopefully, will prove to complement the brain activities.
The recordings can be downloaded by anyone interested from a special European database called EBRAINS. They have been neatly organized in a universal structure called BIDS to make it easy to operate and use with other similar recordings. More details about these recordings and their preliminary analysis can be obtained in the article published by Nature Scientific Data – one of the most recognized database journals. Both the data and the article describing them are open-access – available to other scientists:
https://www.nature.com/articles/s41597-021-01099-z
New patient recordings are planned to be added to the database. We hope that by making these recordings available to other groups, we will help push our understanding of memory and cognitive functions and accelerate the progress in developing new therapies and treatments.