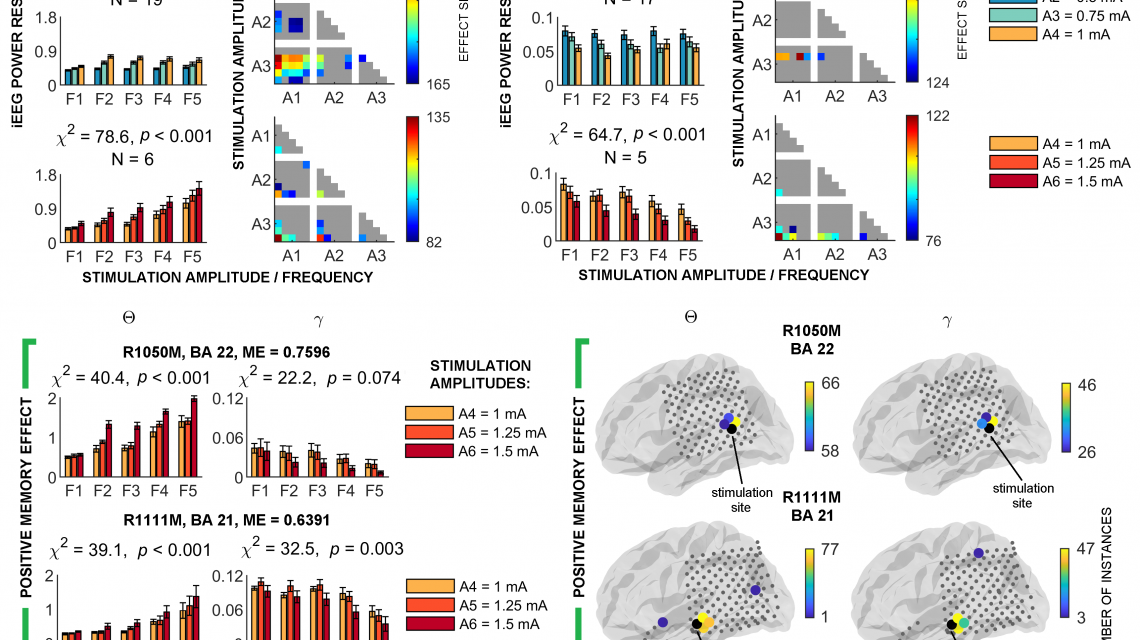 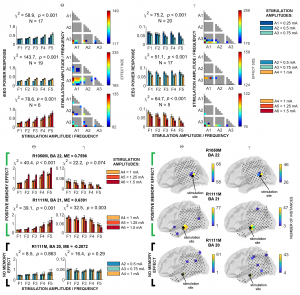 What happens in the brain when it is stimulated with electric current? Can we see a link between the human brain behavior during stimulation and during enhanced memory performance? In our latest article which will be published in the open-access journal IEEE Transactions on Biomedical Engineering we addressed these questions using brain recordings from epilepsy patients stimulated with electric current during quiet wakefulness. In a fraction of electrode sites in the brain (1.4% on average), we found a general effect of direct electrical stimulation, which persistently amplified low and attenuated high frequency activities, particularly in the theta and gamma frequency bands. This effect was not selectively driven by any particular set of optimal stimulation parameters as would be expected in case of an entrainment response, in which, e.g., theta frequency stimulation selectively enhances theta oscillations. Our results suggest that the stimulation current modulated the rhythmic theta and gamma neural activities that were respectively amplified and attenuated. Changing parameters of stimulation drove this general response in proportion to the amount of electric charge delivered – magnitude of the theta amplification and the gamma attenuation was correlated with gradually increasing amplitude and frequency of the stimulating current. We observed more of this response at local than at distal locations from the stimulation site, especially in individuals who reported stimulation-induced memory enhancement. We concluded that it was the total charge delivered with the stimulation at increasing frequencies and amplitudes that drove a uniform pattern of enhanced power of low (theta) and suppressed power of fast (gamma) neural activities.

Systematic analysis of the stimulation parameters and the basic electrophysiological responses in the human brain provides unique advantages for understanding and optimizing direct electrical stimulation to invoke brain responses in the low and high frequency activities that, like the theta and gamma oscillations, are important for memory and other cognitive functions. Determining the basic physiological responses to stimulating the brain electrically at different parameters is fundamental for improving the existing therapies and developing new brain-machine interface approaches to modulate brain functions.