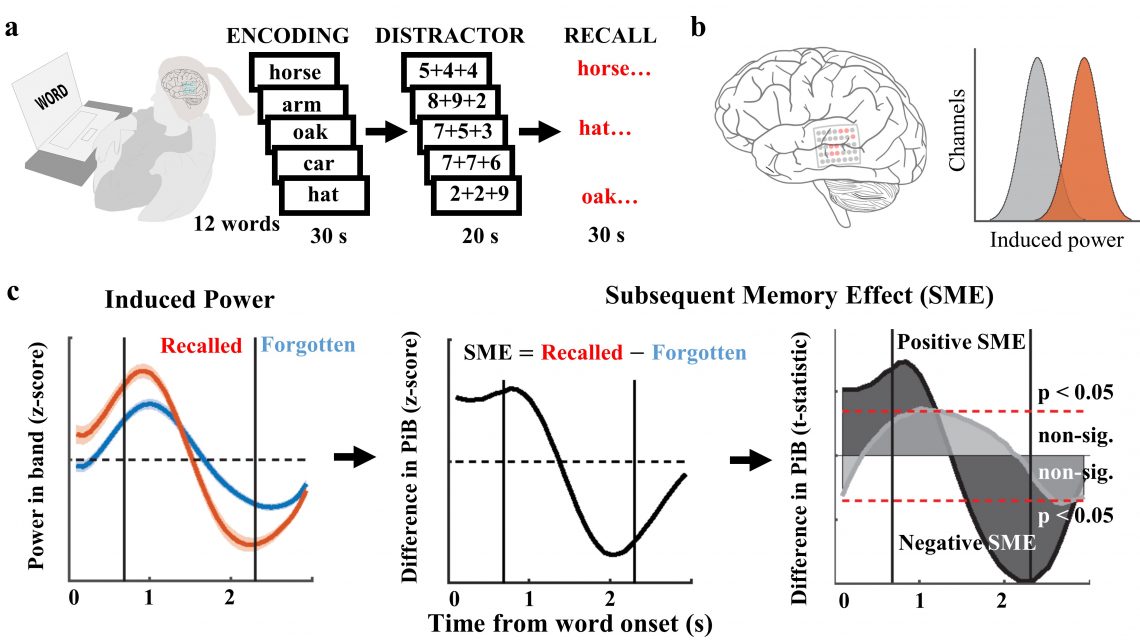 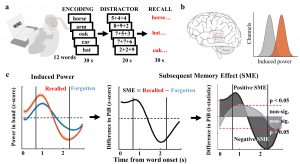 Last week our lab released a seminal paper, summarizing 4 years of our work to find a target in the human brain for new therapies to restore memory functions. Previous research localized multiple areas in the brain that showed neural activities predicting successful memory performance. None of these, however, provided a discrete location and a specific neural activity that could be therapeutically modulated to restore memory functions.

Çağdaş Topçu, a PhD student in our lab, found that brain rhythms of so-called theta frequency reveal the strongest memory effect in the left frontal pole – just below the left side of our forehead. In a large set of epilepsy patients implanted with multiple electrodes to localize seizures, Çağdaş was able to carefully follow the theta activities during remembering lists of words. The theta brain waves were much stronger just before the words were presented for memorization and much weaker during the presentation on trials with successfully recalled words. The specific area with this powerful effect, which was greater than anywhere else in the cortex, was confined to a small patch of the brain (approx. 2x2cm). Such a confined hotspot can be an attractive target for new brain-computer interface technologies and/or brain stimulation devices for restoring memory and cognitive functions. It is even more fascinating that the anatomical location of the hotspot is in the cortical region responsible for higher brain functions like switching attention and executive control of thinking. These are more developed in humans than in our closest evolutionary neighbors.

Our discovery provides not only an anatomical location but also an electrophysiological biomarker to track the effects of therapeutic interventions on memory functions. It allows us to map memory processing in space of the brain and time of cognitive functions. Knowing when and where the memory effect is the strongest is the pivotal step for trying to improve the most abstract functions of the mind, including thinking and forming new memories.

More details in the article itself:

Topolówka
Fahrenheit scholarships
Foundation for Polish Science.
Hope
Electrophysiologist jobs
This site uses cookies to provide services at the highest level. Further use of the site means that you agree to their use.OKPrivacy policy